The most extreme night of the year is kind of an oxymoron in the PG era; with blood frowned upon it takes the edge away from the premise a little but, with that being said, this PPV is shaping up to be quite an interesting affair with the predictability of the heavyweight title bout overshadowing an otherwise intriguing card. Onward:

No DQ Match: Dolph Ziggler vs. Baron Corbin
After the pre-show loss in his PPV début NXT Lone Wolf Baron Corbin is set to get some retribution against the show off in this No DQ slug-fest. This won’t be pretty by any means but when the Lone Wolf is on edge he is an adversary to fear. Dolph Ziggler has his work cut out here and its hard not to look past Baron Corbin rail-roading the Show Off in this bout.

Extreme Rules Match for the World Heavyweight Championship: Roman Reigns (c) vs. AJ Styles
AJ Styles got a decent match out of the champion at Payback and this one could up the ante somewhat. Roman Reigns has been force-fed to fans for months, much to their often very vocal outrage, and nothing is set to change here tomorrow. Styles has had a great run in his brief tenure with WWE and is knocking out some fantastic matches even when dealt a bad hand.

Roman Reigns will be beaten and dominated by the challenger for the majority of the match until the dreaded Superman Punch makes its inevitable appearance and once again allows him to retain.

I can already hear the resounding jeers.

Tag Team Championship Match: The New Day (c) vs. The Vaudevillains
A bout that has spanned the ages thanks to an epically awesome time travel skit on Monday Night Raw this week gone. The New Day are consistently the best thing about WWE programming at the moment and despite the injuries caused to fan fave Enzo Amore at Payback, The Vaudevillians are suitable challengers to the tag team titles.

This will be a show-stealing, hard fought encounter, which will ultimately see the champions retain, although if they were to drop the titles it wouldn’t hinder their popularity one iota.

Submission Match for the Women’s Championship: Charlotte (c) vs. Natalya
Hopefully Ric Flair does stay away from ringside, allowing these two to have a solid bout. Wrestling history dictates a lot of the most interesting story-lines and sadly this one is falling a little short for me, both women can wrestle to an extremely high standard and they just don’t need the hook.

Give them a decent allocated slot and let the technical wrestling flow and the fans will follow.

Another title defence from the champion with her retaining the title via Natalya’s own finishing manoeuvre in one final act of controversy. 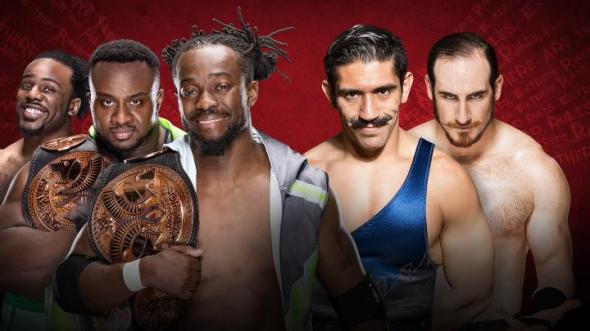 United States Championship Match: Kalisto (c) vs. Rusev
Rusev is a more deserved challenger to the belt than Ryback;  hopefully this will see an improvement in the US title race. Rusev should overcome the Lucha Dragon and steal the title, hopefully setting something up for the returning John Cena.

Fatal 4-Way Match for the Intercontinental Championship: The Miz (c) (with Maryse) vs. Kevin Owens vs. Cesaro vs. Sami Zayn
This match could be one for the ages, a MOTY contender on paper for sure. Even The Miz has been brilliant in the run up to this one and although the spotlight is firmly placed on Sami Zayn and Kevin Owens, we cannot discount he and Cesaro as all four men will be out to prove to the WWE universe that they deserve to be in this title picture.

This is one of the hardest matches to predict but what can be guaranteed is that this will deliver, my heart wants Sami Zayn to get the title and open yet another chapter in the Kevin Owens saga.

Asylum Match: Dean Ambrose vs. Chris Jericho
Chris Jericho has been amazing in his current WWE run; his mic work is exceptional and the natural chemistry he has with the Lunatic Fringe is going to make this spectacular. They did fall a little by the wayside at Payback, admittedly and this will make up for that small blip in an otherwise entertaining feud.

Dean Ambrose has the advantage every time we enter the unknown and as this is the first ever Asylum match it is destined to become a staple of the inmate himself.

Tornado Tag Team Match: The Usos vs. The Club
Gallows and Anderson have slotted into the WWE ways of working rather seamlessly; the NJPW tag champions bring a raw intensity to their ring work, reminiscent of an Attitude Era tag team like APA and are always are ready to fight.

Having them suffer a loss to the insufferable Usos  in the build-up make this a must win situation for the The Club and I doubt that another loss is on the cards for them.

Catch Extreme Rules LIVE on the WWE Network Sunday, 22nd May at 8E/5P