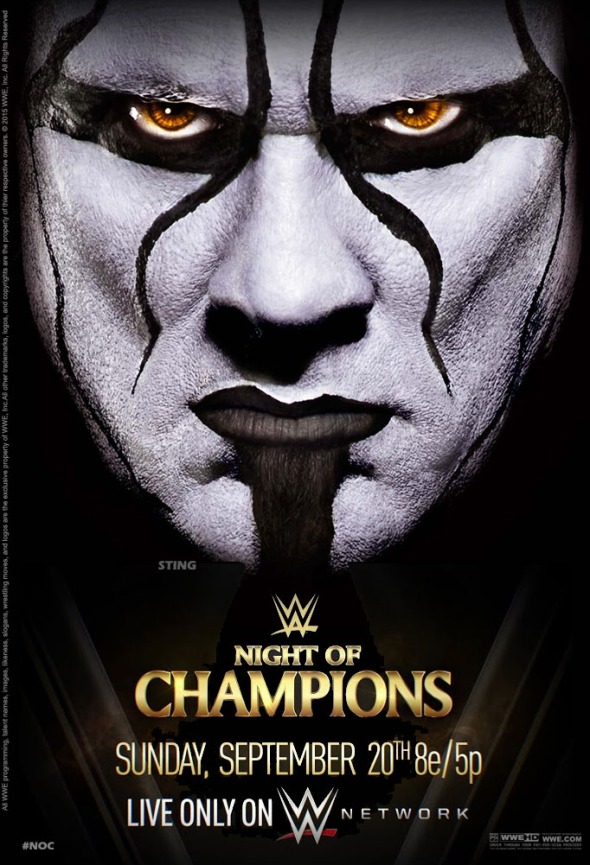 As is, sadly, becoming customary with WWE PPVs, this year’s Night Of Champions felt more like an over-long, middle-of-the-road RAW episode than an exciting, boundary-pushing special event. Thankfully, it wasn’t a five-hour endurance test like the last one, but it was still loaded with filler, as though the outcomes of the matches wouldn’t be terribly hard to predict. There were some glimmers of hope, suggestions that things are about to get better, and there were a few moments of real, head-scratching nonsense. It wasn’t a terrible PPV, but it wasn’t the best either. And for that, I suppose, we should be mostly grateful.

We kick things off, as normal, with the kick off show, which needs to be cut in half ASAP before Renee Young loses her fucking mind. They experts panel is stationed outside the arena for some reason, but otherwise it’s business as usual; Booker T is having none of it, Byron Saxton takes a serious beating (his girlfriend was right to dump him, for example), Corey Graves tries unsuccessfully to convince us of how hot and relevant he is and Renee herself is a trooper, as always. The social media lounge is

enlivened by The New Day, who kick work experience Tom out so they can refer to fans on Twitter as dummies.

Elsewhere, Kevin Owens purposely walks into Eden’s shot, ruining her to-camera piece, following their super-awkward interview. The featured match is fine, more a RAW opener than a PPV pre-show stand-out (is there such a thing?), with all six men coming out of it looking quite well and the victory for The Ascension and Stardust suggesting good things on the horizon for them. Hopefully. The upcoming Divas match is sold hard, with a collage of previous title-holders all of whom, it has to be said, are women’s champs as opposed to Divas champs. Still, it’s nice to see the ladies getting some promotion on a one-hour show that is mostly dedicated to convincing us Stinger deserves to Main Event later.

Night Of Champions kicks off proper with the IC title match, with Ryback emerging to ear-splitting boos and looking a bit put out as a result (he’s kind of right to be confused, this is Texas after all). Every time he steps into a ring with anyone, I get slightly nervous that he’s going to injure his opponent. Luckily, Kevin Owens isn’t messing around tonight and he pummels the hell out of The Big Guy, inevitably stealing his title after a number of failed attempts at the Shellshock lead to him grabbing Ryback‘s nose. He later sells that his eyes have been raked, because he really is that stupid. However, it’s a mostly positive start to a PPV of wildly opposing peaks and valleys.

And speaking of low points, up next we have Rusev versus Dolph Ziggler in the TMZ feud that just won’t die. Summer Rae ruins it for her boyfriend/master after a wayward shoe hits him in the head because she’s a stupid woman distracted by gifts and footwear. Her involvement should lead to a DQ, since it’s totally in front of the ref, but this is WWE and not everything, or indeed anything, has to make sense all the time. Ziggler also has Lana‘s face spray-painted onto the crotch of his tights. If that’s not true love,

I don’t know what is. The crowd are totally dead throughout, barely even registering it when Ziggler hits the Zig Zag to win. It’s hard to care because, if it means this feud is going to continue, I would’ve rather it ended in a DQ instead.

The New Day are up next, facing The Dudley Boyz for the tag team titles in a quick, hilarious and completely mental bout that ultimately ends in a disqualification. Xavier Woods and Kofi Kingston have dressed their hair up for the occasion and, much like the stars on the simultaneous-to-this-event Emmys red carpet, it doesn’t move for the entire thing. Woods cuts a brilliant promo before they get started, regarding their petition to save the tables and immediately it’s the best of the night (until Owens shows up again). He heels it up on the trombone throughout, with the commentators more interested in spotting his references than calling the damn match.

The strength of this bout lies in how it feels it could go either way at any time. In fact, the ending comes quite abruptly, with Woods stopping the Dudleyz just when they are, presumably, about to win. He and his team-mates celebrate retaining by turning on their table buddies and setting up to put their opponents through one. Naturally, this doesn’t go according to plan and Woods eats the 3D instead. All things considered, the returning, nine time tag champs did exactly what they were supposed to do: they put the newbies the fuck over. What happens tomorrow night on RAW doesn’t even really matter all that much, the wheels have been set in motion and the best is yet to come.

The ladies are up next, with challenger Charlotte flanked by her PCB team-mates and Nikki likewise. It starts off strong, with Nikki doing the usual chicken shit heel thing by legging it out, only for her super-confident opponent to demand she re-enters and takes her beating like a, well, woman. Nikki does an insanely good job of showing off why she’s held onto the title for so long, by destroying Charlotte‘s knee and taking breaks here and there to slow the flow with push-ups and rest holds. As she starts fighting back, Charlotte lands some gnarly chops and a superkick for the first near fall of the match, stopping Nikki in her tracks.

Getting desperate, Nikki takes to full on punching her opponent’s knee before hitting a Suplex into the ropes and then Spearing her. However, a bridge into the Figure-8 puts Charlotte back in the driving seat and she steals the win, and the championship, as an exhausted Nikki is

forced to tap out. Naturally, her buddies and father soon flood the ring to celebrate with her and it all gets a bit emotional. Although this wasn’t exactly NXT level women’s wrestling, it was a massive step in the right direction for the main roster Divas. A twenty minute plus match during which they fought hard, had the fans in the palms of their hands and actually made us give a shit about the outcome. Hopefully this is the real beginning of the revolution.

The second 6-man tag of the night (no, really) follows, with Ambrose and Reigns’ mystery partner revealed to be Chris Jericho. This match is all about putting Bronze Statue over as the strongest man in the history of the world. Even Reigns can’t beat him (but he comes closest, obviously). The most exciting moments come with a fan invasion right at the beginning, in Cole’s usage of the informative descriptor “some kind of sleeper hold” and with Jericho’s Lion Tamer to Bray Wyatt, in place of the classic Walls. Other than that, it’s a slow slog whose ending surprises the victor, Wyatt, even more than us. Can he and his swamp buddies get a push now, Vince? Please? Hello?

Poor Seth Rollins is scheduled to wrestle for the entire last hour of the show, but don’t worry, about half of that will be opposite Stinger so he can move a bit slower and it won’t be too noticeable. How sad that the more enticing prospect is opposite Cena, a man we’ve all grown so tired of that we can’t even find the energy to boo him anymore. Just kidding, Texas still does. And he loves it. To be fair to the Superman, he takes a pretty serious beating for most of this match, but he also hits one of the spots of the night (a Yoshi Tonic), eclipsed only by Rollins’ insane Superplex into a Suplex combo, so wash. In the end, Rollins drops the title to him and is then dragged forcibly back to the ring to die at the hands of an elderly. Cena is the biggest face in the company, y’all!

Stinger takes about twenty minutes to get down to the ring, which gives Rollins some time to figure out how the hell he’s going to stand up long enough to beat his decrepit old ass. He fights back valiantly, even attempting to flee after using Sting to demolish the Spanish announce table. But his attempts to pin him are all to no avail and he’s getting visibly more exhausted with each minute that passes. As for the so-called Icon, well, his Splash looks like absolute shit, so it’s even more annoying that we have to see it twenty times over, while his Scorpion lock thing, as much as Rollins sells the hell out of it, looks a bit

too much like a forced cuddle than anything potentially injury-inducing.

His second attempt at the lock is countered by Rollins into a swift roll-up (a theme tonight, weirdly) to retain. However, before he can get too excited, Sheamo turns up to cash in, as he had been teasing he would earlier in the night. But, before he can do that, Kane returns to choke-slam the two of them, before immediately returning to his Hawaiian vacation where he, presumably, needs to get more rested up, judging by his actions tonight. It’s a weird end to a weird PPV, one that managed to surprise and delight in spite of a few major bum notes. In the end, however, it was basically like an okay episode of RAW, nothing more, nothing less. Hopefully Hell In A Cell will fare better. It’s unlikely we’re going to remember Night Of Champions this time next year.