The latest Takeover event – aptly titled Takeover: Respect – still three weeks away, it’s already shaping up to be another must-see event, headlined by what could be a match for the ages, with NXT women’s champion Bayley facing off against Sasha Banks in a 30 min Iron Woman match.

The Dusty Rhodes Tag Team Memorial Tournament is also progressing nicely, with some excellent additions to the NXT roster who will be in action a bit later tonight in order to lay the foundations for the semi final bouts.

The show kicks off proper with Tyler Breeze, interrupted mid-pose on the ropes by the reinvented Adam Rose who has been dealt the short straw with his new gimmick – I mean really who  thought this was a good idea for him? Adam Rose can actually wrestle and is better than this.

Another Superstar who has been unfortunately handed a comedic gimmick, Bull Dempsey is fairing much better with his BullFit persona and seems to be over with the crowd when he, too, enters the fray to challenge Breeze.

As BullFit gets into the ring, the NXT universe chant “Bull is gorgeous” and in a moment of genius he climbs the ropes to hit Tyler Breeze‘s signature pose, which gets a pretty great reaction, while Breeze looks suitably unimpressed.

Rose won’t leave the ring so Dempsey can face Tyler Breeze and, as he slaps Dempsey, he unloads a flurry of punches on the party pooper, leaving Breeze no option but to face him next week. 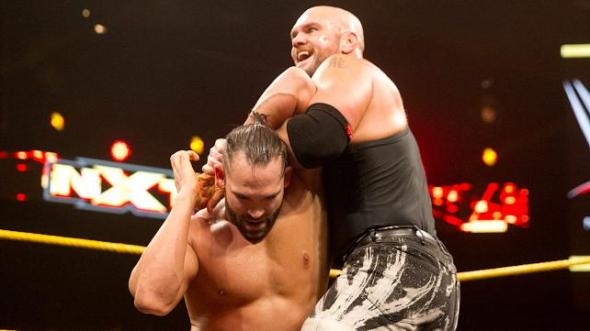 The resident NXT jobber Birch falls victim to the “perfect 10” Dillinger in a short yet effect bout here.

It’s good to see Tye Dillinger going over with the crowd and the gimmick is working wonders for him.

Solomon Crowe is an underused commodity at NXT; this guy has an eccentric and energetic ring presence and could be sold entirely differently to us.

This is not to take anything away from the incredibly athletic and agile big man Apollo Crews, who has had a dream introduction to the Full Sail fans.

A handshake starts the bout in a sign of respect from the long-time friends. This is an exciting match overall, with Crews impressing, but there is still more to be seen from Crowe and it is a shame that he is being used mainly in an enhancement role thus far.

These two have a great in-ring chemistry and the match is fluid and well put together. This could easily develop into a proper feud and keep the fans happy.

But, considering Crews wins, with the Gorilla Press/Standing Moonsault combination, which is an impressive feat in itself for a man of his size, it isn’t given any room to progress just yet. 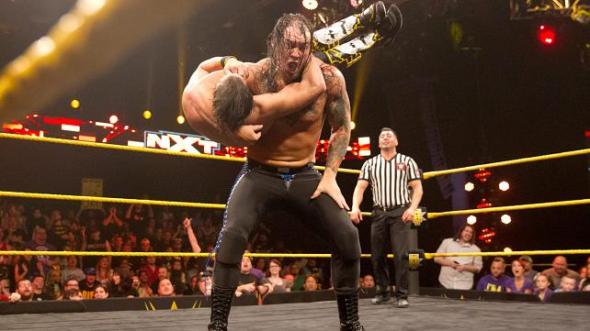 Gargango and Ciampa have been wonderful in their short tenure at NXT thus far, and it will be a shame if this duo doesn’t become a regular fixture at Full Sail in the near future.

They play well off the two bigger men, delivering a series of assaults and taking it to Corbin and Rhyno by exchanging chops and strikes – refusing to back down at all.

The bravado on display suits the team, the teamwork is fluid, with transitions and ring presence showing ability to hold the crowd’s attention with their every move, and all in all it’s a good showing of classic tag wrestling, which is done very well.

Sadly the dream has to come to an end and, although it’s an unwise decision, the shot at the first Dusty Rhodes invitational comes to an end for the free agents at the hands of the Lone Wolf and the Man Beast.

Rhyno and Corbin advance to the semi finals of the competition and, although this team could help the career of Corbin in the long run, a much more enticing prospect would’ve been Ciampa and Gargano defying all odds to make the finals.

Rhyno and Corbin advance, leaving the newbies in the dust 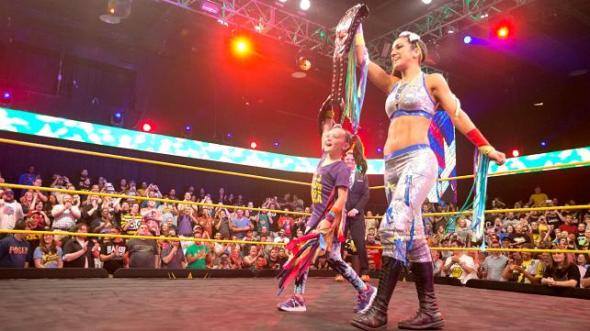 As Bayley runs round the Full Sail Arena, cheering and interacting with her fans, she brings in her super-fan Izzy to join in the celebration, in a heart-warming display that highlights how much she cares about her young fans and vice versa.

NXT newcomer Sarah Dobson isn’t in the mood to celebrate and she wants to make an example of the NXT champion in tonight’s Main Event.

Sarah Dobson is a hard hitting and unorthodox opponent as she tries to put the champ down early in the match, utilising submission rolls and headlock rests to wear down the champion.

Although Dobson gets a lot of offence in and offers something unique to this already diverse roster, it is, of course, Bayley who manages to get the upper hand in a successful return to the ring, winning with a Bayley-to-Belly Suplex.

Emotions are, once again, at boiling point after the match when Sasha Banks puts a halt to the celebrations, admitting that although Bayley beat her at Takeover, she was only better then her for those vital three seconds it took to pin her.

The match of the year contender is set to be a re-match as NXT GM William Regal puts a close to this week’s show by confirming Banks will have her shot at Bayley again in just three weeks time.

He seals the deal by making the Main Event of the show a 30 min Iron Woman match, with the competitor with the most wins after the 30 min time limit leaving the event as the NXT women’s champion.

It sounds crazy, considering how life-changing their previous match was, but this could actually surpass their last encounter.

These women are raising the bar week in week out and Takeover: Respect will solidify their rightful place on the top of the pile, hopefully impacting on RAW booking in the process.

Catch NXT every Wednesday on the WWE Network