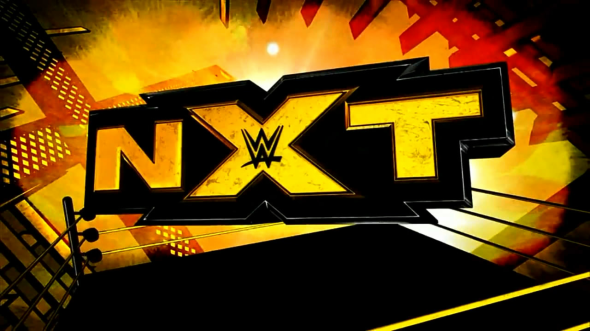 NXT returns home to Full Sail University in Orlando this week, in front of the usual crowd of diehard fans that love to watch the future of the WWE kick ass week in week out. This episode is headlined by returning former champ, and indisputed fan favourite, Sami Zayn who takes on former ECW monster Rhyno.

But before we get to that, there’s the small matter of Parker/Crowe to kick things off: 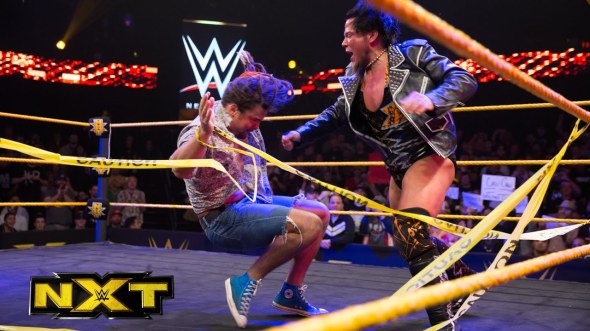 NXT‘s resident Eco Warrior CJ Parker has recently parted ways with the company and, as a result, this is to be his swansong match. He’s up against the new punk anarchist Solomon Crowe, who over the last few weeks has interrupted the broadcast schedules with his hacking vignettes. Crowe is quite impressive in the ring, a techinally gifted wrestler with a good look that fits nicely with the rest of the roster.

A massive springboard clothesline allows the hacktivist to get the upper hand and he quickly applies the Stretch Muffler submission, ending the hopes of the Eco Warrior.

Parker’s final match on NXT sees him go out in a blaze of, er, glory? 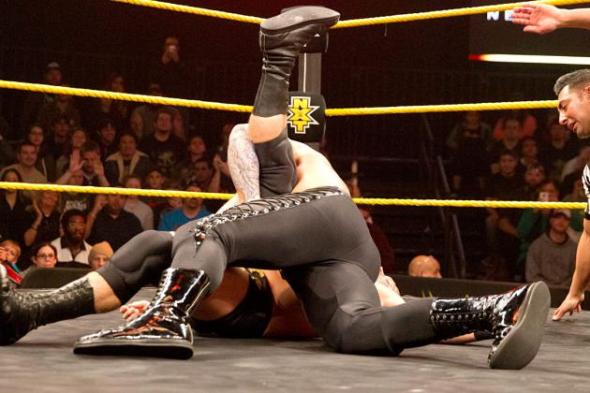 NXT‘s hottest jobber Steve Cutler once again falls victim to the unstoppable machine that is Baron Corbin here. Not one for dragging matches out the Lone wolf hits the End Of Days in matter of seconds, adding another notch to his W record. 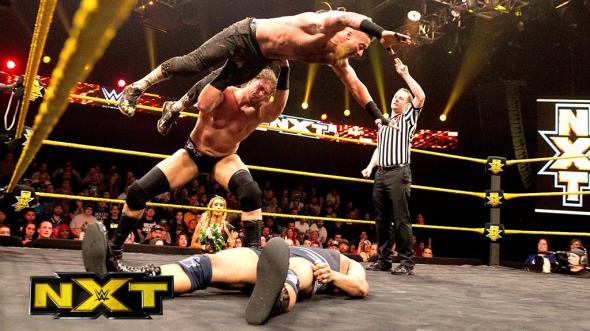 After another excellent intro from the Jordan of Jargon Enzo Amore, who once again has the crowd eating out of the palm of his hand with his brilliant introduction, bringing the duo one step closer to the NXT tag championships by toppling the amateur wrestlers Dawkins and Fulton.

Reminiscent of Shelton Benajmin and Charlie Haas, with the all-American get up and amateur ring gear, they are clearly from the Kurt Angle school of wrestling and that isn’t necessarily a bad thing as their techninal style counteracts most of the other tag teams and they could have a bright future in NXT if handled correctly.

The amateur duo run rings around Enzo, gaining a sizeable advantage and allowing them to throw the G around like a rag-doll, effectively incapacitating him from tagging in the much larger Cass, and stretching him out with an abdominal stretch.

To make matters worse, current tag champs Blake and Murphy head ringside to present Carmella with a rose, further getting into the heads of Cass and Enzo like they did last week but luckily for Enzo and Cass this goes unnoticed and they don’t lose focus as has happened in the past.

The #1 contenders Enzo and Cass quickly take advantage of proceedings and garner an impressive win in the process, keeping their title contendership intact before confronting Carmella in the ring as she gleefully displays the flowers from the champs to the dismay of Enzo Amore.

An interesting way to keep the Blake/Murphy feud alive without having the two teams go at it every week in the ring, that could also possibly be hinting at a Carmella heel swerve.

Enzo and Cass take the win, but Carmella may be slipping away 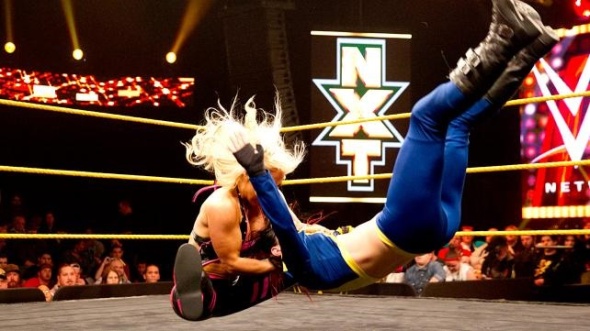 The highly-anticipated début of Ohio-born Dana Brooke finally happens tonight as she faces fan favourite Ole Blue Pants (AKA Leva Bates). The competitive fitness model utilised her incredible strength from the get-go, woman-handling Blue Pants, but the old reliable fought back with some impressive martial arts style kicks. This didn’t deter the newcomer however, as she sweeps up a win with a huge bodyslam variation, getting her very first victory on her very first night in NXT.

Brooke literally sweeps up the win during her very first appearance, marking her out as one to watch

This is a perfect way to introduce Brooke. Regarding how to sell her going forward, I reckon the Brock Lesnar approach would suit her push perfectly; have her work her way through the NXT Diva division in quick succession, maybe via some DQs to save face before unleashing her on Sasha Banks at the next Takeover PPV and she could be a real star.

Although she mainly utilised strikes and the most basic of wrestling moves, it will be worth watching to see how Dana Brooke develops as a wrestler over the next few months as her début was far from technical and the comparisons to Beth Phoenix are yet un-warranted. She is, however, in the perfect position to iron out the details and work on becoming a solid performer. 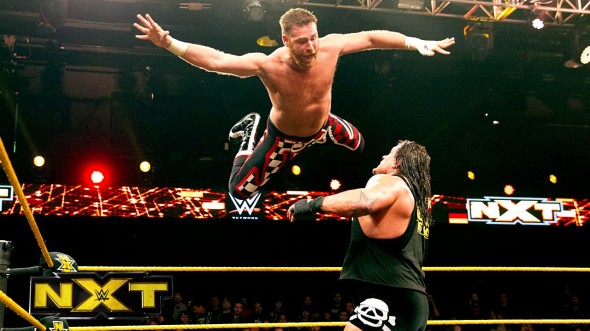 Recently-returned hero Sami Zayn is sick to death of everyone using him as a stepping stone in NXT; most recently ex-BFF Kevin Owens did it to him at the wonderful Takeover Rival PPV, and he is determined not to allow ECW alumnus Rhyno to follow suit.

It’s testament to the ridiculous strength of Zayn that these promos are not doing anything to hinder his likeable, every-guy persona. He doesn’t come across as whiny or weak, which could easily have been the case and indeed has been with numerous other performers in the past. This helps the underdog angle, while the talent he possesses is immense – he is easily one of the stand-out performers in the whole of WWE, not just NXT and is a future heavyweight champion for sure.

Zayn is cautious in the opening moments of this match, feeling out the beast with some headlocks and rest-holds before evading the ring to regroup. He uses his remarkable agility to avoid a gore and turn it into a head scissors take-down, knowing innately that this is the only way to beat Rhyno.

The size of the ECW beast doesn’t prove detrimental against Zayn, the former champ landing a huge dropkick and easily ducking under the stiff forearms of his formidable opponent. He fights with so much heart and passion it’s impossible not to root for Zayn, especially as he lands a crossbody from the top rope for a close two count.

When Rhyno does finally capitalise and take control of the match he overpowers Zayn easily, throwing him around the ring and keeping him grounded where he can. The half-man, half-beast hurls his massive frame into the fan favourite, leaving the former champ crumpled in a heap on the mat.

Zayn kicks out from sheer will and refuses to let the returning star defeat him. He throws a flurry of wild punches before hitting a Blue Thunder Bomb on the much bigger Rhyno as the NXT chant “This is awesome” in unison.

Sadly, it’s not enough to put down the massive Rhyno as the ECW legend once again throws Zayn around the ring like a dog with a chew-toy. Incredibly, Zayn refuses to give up, as he manages to evade another gore and connects with a Helluva Kick to take the victory and keep his coveted #1 contender spot in an excellent Main Event.

Incredibly, Zayn takes the win and puts down the Rhyno

Since his return in to in-ring action Rhyno seems totally rejuvenated. Being in NXT seems to be doing wonders for him, and he could be a great asset to the younger talent in this roster, much like Alex Riley is doing with his feud against Kevin Owens.

The solid block of wrestling works in favour of NXT and they manage to juggle the numerous, consistently strong, feuds over the weeks so the product is rarely stale while simultaneously allowing each wrestler to hone their own gimmicks and in-ring style. It remains as a testament to the hard work that happens at Full Sail University, every week and suffice to say, NXT is unmissable television for any pro-wrestling fan.

Catch NXT LIVE every Wednesday on the WWE Network