Hey wrestling fans, I am “The Hardcore Legend” Tom Robinson. And first of all, sorry for all the inactivity in the last couple of weeks. I’ve been focusing on other stuff and really haven’t had time for the wrestling side of things. But I’m here with a post, and it’s to do with a subject I’ve really wanted not to talk about… the current situation with TNA.

In my opinion, 2013 was supposed to be the big break-out year for the world’s number two wrestling company. TNA had a some serious momentum with the Aces And Eights storyline and things was just going right for the company. They even took to the road, breaking away from the dead-as-hell Impact Zone to break new ground by appearing live in front of crowds all around America. It was a couple of risky endeavours but it seemed like it was beginning to pay off right?

But then… July rolled along. In the storyline, the Aces And Eights were a strong a threat as ever as the Bound For Glory Series rolled in. It seemed the Road To Bound For Glory had took off to a great start with big names in the BFG Series and the X-Division was gaining attention again with Chris Sabin getting set to challenge Bully Ray for the TNA World Title. However, the Aces And Eights saw some new opposition in the form of the New Main Event Mafia! I wouldn’t have minded the Main Event Mafia coming back if it weren’t for a couple of things…

1) Sting has once again got up in Bully Ray’s business while he was feuding with Chris Sabin, even though Sting was unable to compete for the World Title again. Not only is Sting’s nose where it doesn’t belong but it made Sabin looked weak without the Main Event Mafia, especially when Sabin actually fought Bully at Destination X and the Mafia got involved.

2) For a group known as the MAIN EVENT Mafia, Magnus was not really an appropriate addition to the group. Don’t get me wrong. I love Magnus to death and I think he’s an amazing piece of talent, but he needs to establish himself on his own before joining anymore groups. Not to mention, Magnus has never won a World Title in his life and has never been in a TNA PPV Main Event in his life. Really? The Main Event Mafia?

3) Quinton “Rampage” Jackson. I would have much preferred it if Jackson wasn’t in it, purely because he’s never had any proper experience in pro wrestling yet. He’s a quality fight and a fan of pro wrestling and that’s respectable, but don’t have him getting involved in big storylines like this just yet. He’s literally just there as a ratings pull.

Also, faction vs faction feuds in TNA have been done SO many times in TNA. Fourtune vs Immortal. EV 2.0 vs Fourtune. TNA Frontline vs Main Event Mafia. The Aces And Eights shouldn’t have been given that treatment.

And the Suicide/Manik business? That is just some of the most absurd booking I’ve ever seen. I loved it when Austin Aires took the suit and won the X-Division title. That was well done. BUT, I hated it as I’m sure all of you guys hated it when the original “Suicide” was reintroduced as “Manik” the next week. What the? OK. So even though we knew the identity of the original Suicide after Aires took his suit, you’re gonna put him in another suit? Oh and then after Manik won the vacant X-Division title 2 weeks ago, he unmasked himself again backstage. It’s just mind boggling.

Then there was the new X-Division Title belt…

It looks like a crossover between the NXT Championship from WWE and the Light-Heavyweight Championship from the WWF days. It looks childish and come to think of it, why did TNA feel this amazing belt needed replacing? 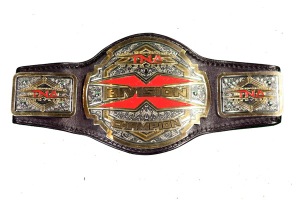 It was original, cool looking and was the same design that TNA had used for the belt since the beginning. I mean it was just daft to replace it with the new one when no-one had a problem with the original. I don’t want to sound like a status-qua guy here, but that belt didn’t need replacing. Sometimes old is better.

Right now we are getting down to the REAL problems. Right now I’ve just picked at some booking flaws and stuff, but the legit problems TNA are having behind the scenes. First all of the releases from TNA.

It’s worrying to see so many releases in the space of a month. Sure, WWE make a lot more cuts to their rosters but they’ve got a much bigger roster to cut from. TNA still have a small array of wrestlers. I mean the Matt Morgans and the Crimsons I couldn’t give a fuss about considering how little of an impact each guy made. But up-and-comers like Taeler Hendrix? Veteran Knockouts like Tara and Madison Rayne? A MEMBER of Aces And Eights D.O.C.? Of all the guys to choose from your roster to cut, why someone who is a part of your most important stable of the company. And someone who looked like they were gonna turn face and hit it big? That was the biggest thing that annoyed me. All of these guys just thrown by the waist-side without any real exit storylines from TNA. It’s real sad to see, especially for the knockouts like Tara who have been there for a while.

And reportedly, being on the road has caused TNA some financial headaches. Sure it was going to be difficult to leave the Impact Zone, but I respect that wanted to take that risk. But if was going to be this bad, why did they go on the road as soon as they did? They shouldn’t have tried it if they didn’t know if they’d be alright financial. And it’s a shame that the roster is suffering from it too.

Then there’s the infamous #AskDixie incident. Something that really pissed me off. I know it was a stupid time for Dixie to open up the Q&A for TNA considering the stick it was getting and Jesse Sorensen whining about being released despite his neck injury, but it was a damn shame that the fans just took the piss. Dixie Carter was only trying to connect with the fans on Twitter and they were just ripping on the company that they will be missing big time when it goes. Wrestling fans will not realize how much they’ll miss TNA until it’s gone. In fact, you want realize how much you’ll miss anyone until they’re gone. So it’s best to take it for granted. A great life lesson for you guys. 🙂

That’s just a few of the things that have went wrong at TNA this month and it really makes me worry what’ll happen next. It’s clear that the fans are gonna start losing interest in the company with the Brock Lesnars and the Rob Van Dams returning at WWE and the build up to Summerslam. So TNA have really got to clean up the issues that are driving the company to the ground. I know I’ve just spent this entire blog post criticizing the company, but I really want them to pull through these difficult times. I think that’s what the entire wrestling community wants, whether they want to admit it or not. Even the biggest TNA hater NoDQ.com owner Aaron Rift said TNA going out of business would be bad for his website. Hell, if TNA went out of business then WWE would be the only major wrestling company left. And how boring would that be? WWE could put on a blindfold Royal Rumble match and not worry about the competition. No matter how bad the show will get, they are still the top dogs. I think we are all want TNA to get better and I hope that it can overcome.

I’m Tom Robinson. Please read my blog the “Armbar Express” alongside Gorilla Press Online. And I leave you with the random YouTube Video of the post…. step right up and get your chest slapped by Antonio Inoki. XD Goodnight everybody!